A research group at Aarhus University has found a way to transform a naturally occurring substance class that is toxic for both bacteria and mammals so that it is only toxic for bacteria, including antibiotic-resistant bacteria. This means that polyether ionophores, as the substances are called, could be candidates for the antibiotics of the future.

Resistance to antibiotics is one of the biggest threats to global health. Existing antibiotics are becoming less and less effective as the bacteria develop new resistance mechanisms.

If we are to avoid a disaster in which millions of people die of infections that were previously harmless, we have to develop agents that the bacteria cannot defend themselves against.

Researchers at Aarhus University have now found unexpected candidates for the antibiotics of the future: polyether ionophores, a group of naturally occurring molecules with the common property that they can transport positively charged ions through cell membranes.

Paradoxically, polyether ionophores are both unexpected and obvious candidates.

It has long been known that many ionophores are very good at killing certain bacteria, including bacteria that are otherwise antibiotic-resistant. Some of them are used as growth promoters in the agricultural sector, for example when mixed in chicken and rabbit feed they prevent the coccidia parasite.

However, science has previously ignored them as possible new antibiotics for humans, because there is a risk that these ionophores are toxic to humans, as they do not immediately distinguish between cell membranes in bacteria and in mammals.

That said, in recent years experiments with selected polyether ionophores have shown that they can be targeted at aggressive cancer cells and can protect against scarring of the heart muscle in experiments with mice.

A group of chemists and engineers from Aarhus University have created artificial versions of polyether ionophores with new properties that make them between three-times and ten-times more antibiotic than the strongest of the natural substances from the group. This means that they are three-to-ten-times more selective and kill bacteria rather than human cells.

"Our synthetic ionophores retain their original toxicity towards bacteria, but they’re significantly less harmful to human cells. We’ve also checked whether they affect human cells in other ways when the substances are administered in non-toxic quantities. And they don’t," says the head of the study, Professor Thomas B. Poulsen from the Department of Chemistry.

However, it is important to add that the ionophores do not work against all types of bacteria, only the so-called "gram-positive" bacteria (an expression describing the type of cell wall), which includes staphylococci, streptococci, bacillus, listeria, enterococci and clostridium. Copying nature's own weapons

Not only has the research group found a way to change the properties of the substance, they have also found a clever and inexpensive way of doing so.

We will return to this later. First a little background.

Creating new, complex molecules from scratch is hard work, but there are several advantages: Firstly, it is possible to change their structure and design to enable them to combat human diseases. And secondly, you can mass produce them.

So far, the group has primarily focused on synthesising natural substances for cancer treatment. Read more about this in the links to articles below.

However, with polyether ionophores, the researchers have dodged much of the laborious work of synthesising from scratch. And this is very fortunate, because, as is normal for bioactive molecules, the molecules have a very complicated structure.

"The molecules in this class consist of modules, and we’ve developed a method for cutting these modules from each other and then joining modules from different versions of the substances into new molecules. This means that we can efficiently and systematically put together new variants and test them until we find combinations with the desired properties," says Thomas B. Poulsen.

Work is also made easier because the polyether ionophores being used by the researchers are easy to procure. They are already used as feed additives in agriculture around the world and do not cost much.

The research group is now aiming to further optimise the synthetic substances and the process so that, in the future, they can be used as antibiotics for humans. Therefore, they are in contact with partners at other universities to make ready for pre-clinical trials.

Microscopy images of mammalian cells coloured with different fluorescent substances (the cell nuclei are blue, the mitochondria are red and the actin cytoskeleton is green) and treated with four different substances in the same concentration: The control substance, DMSO, does not disrupt the cells, lasalocid and monensin, both of which are naturally occurring polyether polyphores, and the synthetic polyether ionophore HL201, on which the study is based. The naked eye can see that the naturally occurring ionophores significantly change the morphology of the cells, and that the HL201 does not. However, many of these changes cannot be seen with the naked eye. Computer power is required.

Below, the computer has created bioactivity profiles, which show how HL201, lasacolid and monensin create changes in over 1,000 different features in the cells. The black triangles on the right indicate the increasing dosage amount from top to bottom. The experiment shows that the naturally occurring ionophores have a significant effect on mammalian cells at much lower concentrations (strong profiles = red circles) than the new synthetic ionophore HL201. 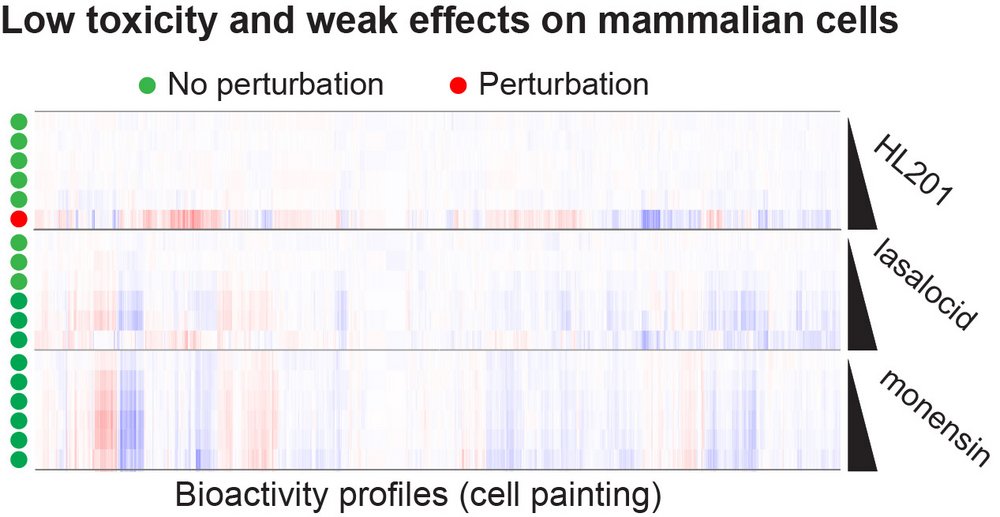