Researchers from Aarhus and Copenhagen universities have shown that environmental DNA - the method of analysing DNA from an environmental sample to find out which organisms live in the area - works on a large scale. In a three-year project, they have used the method to map the biodiversity of the sea around Qatar based on DNA purified from seawater.

Conservation and management of marine biodiversity is dependent on efficient biomonitoring, but most current monitoring tools are resource-heavy and only applicable to a specific group of organisms, such as fish or whales. However, all living things contain DNA, and the analysis of DNA traces from environmental samples such as water or soil has proven an efficient way to detect species from across the tree of life.

The application of this method to seawater samples was pioneered at Copenhagen University by Dr. Philip Francis Thomsen and colleagues, who showed that the environmental DNA (eDNA) approach was equally or more efficient for detecting marine fish species than a range of traditional methods, including nets and snorkeling.

Since then, the eDNA method has been tested on marine species ranging from crustaceans to corals, but most studies have been at a relatively small spatial scale. To investigate the potential of the approach for marine biomonitoring at a larger scale, a team led by Dr. Thomsen (now Aarhus University) and Dr. Peter Rask Møller (Copenhagen University) initiated the project “AQUATAR”.

The team collected seawater samples from coral reefs, seagrass beds, mangroves, and open water areas, analysed them for traces of vertebrate eDNA and compared the results between different sites.

While there were some overlaps in species composition between habitat types, the results showed that the composition of vertebrate eDNA found in seagrass sites was clearly distinct from that found in for instance mangroves.

The results of the study were published earlier this year in the international journal Conservation Biology.

Postdoc Eva Egelyng Sigsgaard, who is first author on the study, is currently part of Dr. Thomsen’s research group at Dept. of Biology, Aarhus University.

She points out, that the eDNA method is already a well-established monitoring approach in freshwater ecosystems, but in the ocean, the potential of the method has been more uncertain due to the greater theoretical possibility of eDNA transport across large distances and of dilution of DNA beyond detectability.

The aim of the project was to test the potential of the eDNA approach for mapping marine vertebrate diversity at a national scale, and to establish whether various marine habitat types could be distinguished based on the DNA traces in the water.

The project was a collaboration with Qatar University, the Ministry of Environment in Qatar and MO-RTC. 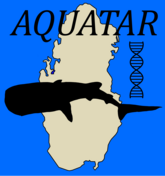 “However, initial studies indicated that the method was both sensitive and showed high spatial resolution, and our study confirmed this at a large scale. With just under 50 seawater samples each of 3 liters, we detected almost 200 vertebrate species, including both fishes, mammals, birds and turtles, and the species were detected in their known habitats. For instance, fish species known to be reef-associated were mainly detected at coral reef sites, and the dugong was only detected at seagrass and sand bottom sites,” says Eva Egelyng Sigsgaard.

The possibility of simultaneously surveying for a wide range of species coupled with the non-invasive nature of the eDNA method are among the main reasons that the approach could be a valuable supplement to existing marine monitoring methods. In addition, the method is less dependent on taxonomic expertise, which is often in short supply, and which represents a challenge for other non-invasive methods such as snorkeling.

Associate professor and curator at the Natural History Museum of Denmark, Peter Rask Møller, who conducted visual surveys alongside the eDNA sampling, says:

”The eDNA method will be a valuable new tool, especially in fragile environments such as coral reefs and in areas where different kinds of fishing gear are prohibited. In Qatar, where no bottom trawling is allowed it will make a huge difference for our ability to obtain information about marine biodiversity. The method still requires a reasonable sampling effort, but will cover more taxa than conventional methods.”

He adds that the results also show that using several monitoring methods in parallel is still worthwhile and that taxonomic expertise is still important.

While the eDNA method should not stand alone, and holds its own challenges, such as incomplete reference databases of DNA sequences, the promising results from this and other studies have prompted further efforts to apply, test, and expand upon the approach.

Now it's time for the Danish coasts

Dr. Thomsen, associate professor at Aarhus University, is currently leading the project “COAST_SEQUENCE”, which is funded by the Velux foundations and is a nation-wide eDNA survey of Danish coastal biodiversity across the tree of life from microbes to mammals.

“In Qatar, we really got to test the eDNA approach in the marine environment at a national scale for the first time. Until now, it has been restricted to single species, populations or local communities. So it was interesting to learn that such an extensive mapping of biodiversity was indeed possible. Now we are taking an even more ambitious approach in Denmark, where we have been taking more than 1000 seawater and sediment samples to create the first eDNA-based map of coastal biodiversity for an entire country and across all organism groups”.

The study "Using vertebrate environmental DNA from seawater in biomonitoring of marine habitats" i Conservation Biology.