Natural Sciences About the faculty News show
Department of Biology

The sperm whale is the world's largest toothed predator, and they consume as many fish and squid as the entire global fishing industry. However, we have not, until recently, understood how such large predators find their food in the deep ocean. By putting a data logger on the tip of the nose of a sperm whale, researchers from Aarhus University have gained the first insight into the world of the prey a sperm whale is seeking out, and they can show that sperm whales hunt with the help of a long-distance sonar.

"We know from previous studies that sperm whales try to catch about 20 prey per dive. But knowledge of the deep-sea world in which sperm whales hunt has long been the missing piece in the puzzle to understand their foraging behaviour. Do they catch twenty prey because that’s the only prey they can find, or do they pick out these twenty from a far larger selection?" says postdoc Pernille Tønnesen, who is the main author of an article published in Royal Society Biology Letters.

"Such knowledge is really difficult to obtain, because it requires fitting an audio recorder right on the tip of the nose of the whales, from where they transmit their sonar clicks. From this position, we can record returning echoes without the whale's giant body blocking the sound," she explains.

In the video clip below, you can see Pernille Tønnesen attaching the data logger on the nose of a sperm whale.

With a dedicated effort and good collaboration between researchers from Aarhus University and the Azores, for the first time it has been possible to record such echoes from prey up to distances of more than 200 metres in front of a whale.

"We’ve long wondered how sperm whales find food in the deep sea, and now we can demonstrate that they use their massive sound-producing nose as an extremely long-distance sonar to locate their prey," says Professor Peter Teglberg Madsen.

With its long-distance sonar, the sperm whale can locate a deep-sea buffet with several hundred potential prey per dive, and then it carefully selects less than 10% for its meal. The researchers at Aarhus University can also show that the sperm whale prefers to hunt where there is a low density of prey: probably to avoid being confused by a shoal effect.

”Our data show that sperm whales use the animal kingdom's most intense sound to get a lot of information about their surroundings, and above all it enables the whales to hear their prey from many hundreds of meters away, ”says Pernille Tønnesen.

A long-lived myth has suggested that sperm whales use their powerful sound to paralyse their prey. "We can see that this is not the case, but that sperm whales instead use their intense sound to create audible echoes, even from prey several hundred metres away," concludes Pernille Tønnesen. This unique insight into the world of the sperm whale demonstrates how important sound is in locating prey in the vast deep oceans, and it stresses the importance of building up greater knowledge about the type of prey the sperm whale prefers. 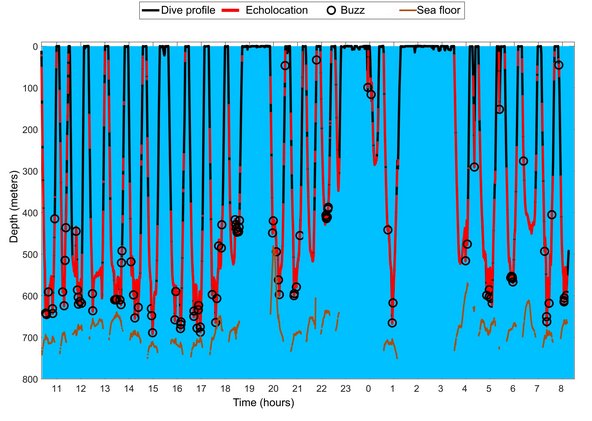 Data from the data logger shows how the sperm whale searched for food in 27 long and deep dives. It only paused for 4 of the 22 hours the researchers recorded its movements. (Graphics: Pernille Tønnesen)

The article in Royal Society Biology Letters can be foudn here: https://royalsocietypublishing.org/doi/10.1098/rsbl.2020.0134